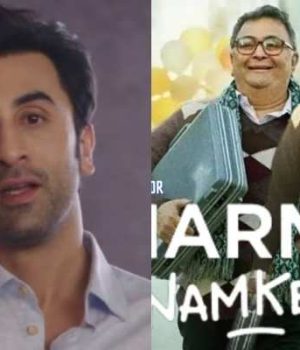 Late Rishi Kapoor’s last film Sharmaji Namkeen is all set to release this month end on Amazon Prime Video. The actor last breathed on April 2020, while the film’s shoot hadn’t been completed. After that, Paresh Rawal stepped into Rishi’s role in the film. Recently, Amazon Prime Video has shared a video on their social media accounts, featuring Ranbir Kapoor, he talks about the film and why the film is special to him and recounts that at one point. He considered using prosthetics to complete the film.

In a video, Ranbir is seen talking about his late father, he says, “I’m here to share something that makes Sharmaji Namkeen a very special film. This film isn’t special for me just because it’s papa’s last film but papa really believed in the story. I remember when he fell sick in the middle of the shoot, he somehow wanted to complete the shoot but life had other plans. He continues, “You may have heard ‘The show must go on’. Papa lived it. After he left, it felt that the film may not be completed. We thought of trying VFX or I could wear prosthetics and finish this role. But nothing was working out. And that’s when Mr. Paresh Rawal stepped in and helped us finish the film.”

Ranbir Kapoor thanks Paresh Rawal in a video for stepping into his father’s role at the last minute to complete the film. Ranbir said, “It was very generous of him to take up this challenge because two different actors playing the same character is extremely rare in the film world. Thanks to Paresh Ji, we could complete papa’s last film and bring it to you all. will always be one of the most fondest memories of my father. Upon the screen, bringing a smile to his countless fans.”

Sharmaji Namkeen also features star-like Juhi Chawla, Suhail Nayyar, Taaruk Raina, Satish Kaushik, Sheeba Chaddha, and Isha Talwar. The film is set to release on Amazon Prime Video on March 31 and the trailer of the film will be released on Thursday, March 17. The film is directed by Hitesh Bhatia and produced by Excel Entertainment in association with MacGuffin Pictures. The story is about a recently retired man who discovers his passion for cooking after joining a women’s kitty circle.