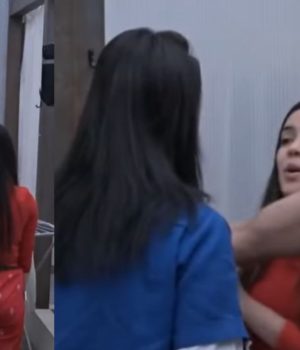 Lock Upp, hosted by Kangana Ranaut, has indeed proved to be quite successful in the OTT space, as it has become the highest watched reality show on a digital platform. Recently, Mandana Karimi, as 16th contestant and Pakistani blogger Azma Fallah, a new wild card entrant, have arrived in the badass jail, and the co-Kaidis are quite surprised to see them. It’s not even been a day 1 and the new Kaidis have started playing their game. Azma gets into a heated argument with Anjali Arora.

It all started when the new wild card contestant Azma declared that she will not be helping anyone in the household work until she feels like doing it. Anjali clearly did not like her attitude and got irritated. A huge fight breaks out between Azma and Anjali after the blogger intentionally cleans the bathroom with Anjali’s towel. Not just this, she also asks Ali Merchant to inform Anjali about it.  After learning about the same, she gets pissed off and slams Azma saying, “If you’re going to clean the bathroom, at least clean it nicely.”

Things got worse between the two after Azma Fallah throws away the towel on Anjali’s face. Another major fight breaks out between Azma and Mandana. The model tells the blogger that she shouldn’t have done this with Anjali. Hitting back at her, she said, “you don’t tell me what to do as you have done nothing in the industry and no one is asking you!” Mandana replied, “First look at your height, then speak.” Meanwhile, this week, Ali Merchant, Payal Rohatgi, Nisha Rawal, Anjali Arora, Sara Khan, and Poonam Pandey are in the charge sheet.