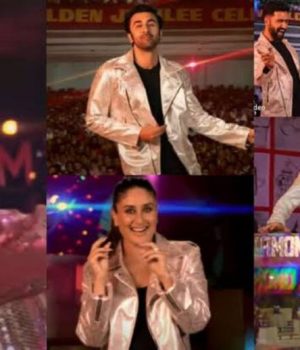 Late actor Rishi Kapoor’s last film Sharmaji Namkeen released today. Many celebrities from the Bollywood Industry pay their tribute to Rishi Kapoor with a musical video. In the video, Ranbir Kapoor, Alia Bhatt, Aamir Khan, Kareena Kapoor, and others were seen in the video. Neetu Kapoor shared the video on her Instagram, where all the actors are seen dancing on ‘Om Shanti Om.’

She captioned, “Lovely tribute to Kapoor Saab. #sharmajinamkeen.’ In the video, Ranbir, Alia, Vicky, Farhan Akhtar, Arjun Kapoor, Siddhant Chaturvedi, Ananya Panday, Aadar Jain, and Tara Sutaria are seen dressed in the same attire as Rishi Kapoor from the ‘Karz’ song. The video opened with Rishi’s face and the lines “When you truly live life, you live on.”

After Rishi’s demise, the makers wanted to rope in Ranbir as his replacement with the use of prosthetics. However, that did not seem to have worked out for them. Later, they brought Paresh Rawal on board to fill in his shoes. The film also stars Juhi Chawla, Satish Kaushik, and others in key roles.

In a recent interview, Ranbir revealed that when Rishi came to know about his cancer it was his film that he was concerned about more than his health. Ranbir also added that all through his one-year treatment in the US, he just spoke about the film.