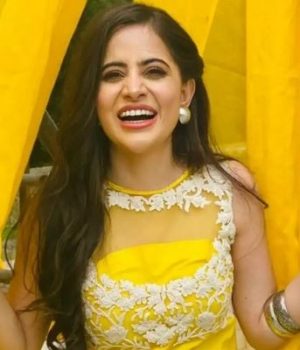 Urfi Javed was always known for her bold fashion sense, she was last seen in Bigg Boss OTT which is hosted by Karan Johar. Now, Urfi shared her bikini photos on Instagram. Never goes a day when Urfi does not make headlines. In fact, She is under the radar of trollers for her outfit, who often called her out on her social media for donning bold dresses. Recently, Urfi posted her bikini avatar and put the internet on fire.

While many showered heaps of praise on the actress, a certain section of netizens badly trolled Urfrii, calling her ‘cheap’. Urrfii Javed took to her Instagram handle and shared a video of herself wherein she is seen plucking flowers from a tree. Alongside it, she wrote, “I’m a rose that came from concrete.” The actress sports a black colored bikini and looks smoking hot while plucking flowers. Towards the end of the video, the actress puts plucked flowers in her hair.

Some users trolled Urrfii for her outfit in the comments section of the post. One troll commented, “tumhe phool ki nahi kapdo ki zaroorat hai’. Another wrote, “pata nahi kya hi pehna hai..” A third user called Urrfii ‘cheap.’ On the work front, she was recently featured in the song ‘Befikre’ with Indo-Canadian Singer Kunwarr. Ahead of its release, the duo sparked off their dating rumors but later dismissed it by releasing a statement.