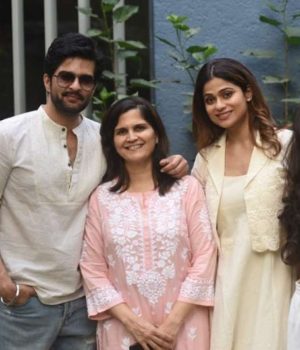 Shamita Shetty has recently visited her rumored boyfriend Raqesh’s family residence in Pune. Shamita posed with Raqesh and his sister Sheetal Bapat and niece Isha Bapat. Fans can’t get over the pictures, after Sheetal shared the pictures on her Instagram account, and dropped heart emojis on the post. Sheetal shared the pictures on her Instagram handle on Sunday and captioned them with a red heart emoji, a hugging emoji, and an angel emoji.

Soon after the post was shared, several fans of Raqesh and Shamita commented on #ShaRa, as they are affectionately called. Others called the pictures the “best surprise.” Some were surprised to see Shamita visiting Raqesh’s family and commented, “someone pinch me please.”

Others wrote that they were not ready for these pictures. One commented, “We weren’t ready for this but we were so ready for this!?” Some thanked Sheetal for posting the picture, with one writing, “Awwwwwwww tai thank you so much for posting.” A fan wrote, “crying! so beautiful,” while another commented, “family vibes. lovely pics.”

Raqesh Bapat and Shamita Shetty fell in love after they met in the Bigg Boss OTT house. Recently there were rumors of a breakup, which Shamita had denied through her Instagram account. When Raqesh was asked about the rumors that he’s living in his hometown Pune away is a topic of contention with Shamita, who lives in Mumbai, e told Hindustan Times, “I don’t understand where these rumors come from. We don’t speak about these things.”