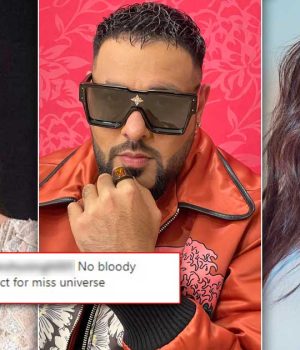 Miss Universe Harnaaz Sandhu made India proud when she was crowned ‘Miss Universe 2021’ afetr Lara Dutta she is the third entrant from Inida. Ever she bagged the title, Miss Universe has made several public appearances, be it walking the ramp at Lakme Fashion Week or gracing the small screen with her presence. As we speak of that, recently, she appeared as a guest on the talent based show ‘Idian Got Talent 9.

Harnaaz shared a BTS video on her Instagram handle giving a glimpse to her fans about her experience on the show. In the video, one can see her excitement to be on the show as she gracefully and happily walked to the judge’s panel where Kirron Kher, Manoj Muntashir, and Badshah welcomed her. They all congratulated her for making the nation proud and winning the coveted title. Badshah was heard saying, ‘Yeh teesra koi Aaya hai Punjab Se’. However, in the video, one can see Shilpa’s face when Harnaaz comes to greet all of them as she stands there with her sister Shamita Shetty. And looks like Shilpa’s reaction has miffed netizens.

Netizens are not very much impressed with the way Shilpa and Badshah welcomed Harnaaz and called it ‘fake’. Many took to the comment section and reacted strongly to the video. One user commented, “These judges lack basic manners.. So fake and non-interested.. Itni acchi ladki hai harnaaz.. Desh ka naam kia hai.. Koi respect Kuch nhi.. Shameful” while another wrote, “What’s wrong with them ?? Seriously dude it’s clearly visible that they are giving fake expression.”  A third comment read, “This girl did so much for the country, brought back the crown after 21 years. And look at the judge’s reaction, it looks so fake and they seem not at all interested to greet and meeting her.”