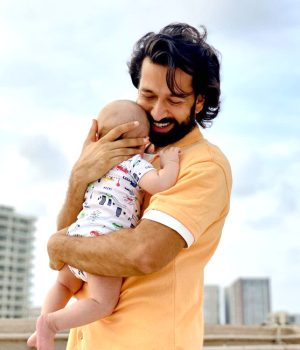 Nakuul Mehta is on cloud nine, the Bade Achhe Lagte Hain 2 actor won the BollywoodLife Awards 2022 for Best Actor. Nakuul plays the role of Ram Kapoor and fans love him as a Ram Kapoor but often been criticized for sloppy writing and dialogues. But recently, Nakuul posted a picture on his Instagram with trophies, and his son Sufi was also seen in the picture. Nakuul loves spending time with his one-year-old son and often shares photos of Sufi on social media.

Nakuul captioned, “I don’t get to see my Dadda so much as he’s always shooting. Honestly, I don’t know what he shoots as Mumma doesn’t allow me any screen time but occasionally when we step out, I see people coming to take selfies and chitchat with him. I have come to the conclusion that he definitely does something that brings happiness and joy to so many people around the world. Probably he’s talented.. just like me.. at bringing a smile on everyone’s faces… Imagine he’s also been awarded a big trophy for it .. Best Actor Television for his show.”

Bade Achhe Lagte Hain 2 is a second season of the hit show that had Ram Kapoor and Sakshi Tanwar, which was a hit among fans. Just like the season, 1 fan loves season 2 too. Along with Nakuul, his opposite lead is Disha Parmar, they both united after 12 years for the show.