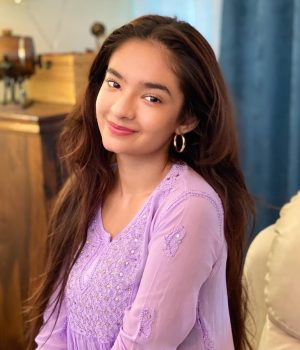 Anushka Sen was last seen in a reality show and is now set to debut in the K industry. The former child artist recently shared the good news that she partnered with the creative industry for their upcoming web shows and films. In a recent chat with Hindustan Times, Anushka Sen spoke about her collaboration with the Korean creative agency. She also spoke about how her incredible fan following in South Korea and India helped her venture into their industry. She said, “The year 2022 looks very promising. I am so excited about me signing up with a Korean agency. I will be doing a Korean language web show and a movie. It will be a different year for me.”

Further explaining the reason behind her association, the actress added, “I have a sizeable fan following in Korea. It is very surprising for me but it is a great surprise. I love my fans and I am what I am because of them. I think they like me because they connect with me. I can’t wait for my Korean fans to see me immerse myself in their culture through my two projects. I can’t wait to tap that market.”

Anushka Sen shared how her social media presence helped her gain popularity all around the globe, she said, “You need to know how to handle social media. A lot of people take it as a job. It is not a job for me. I don’t think that it is mandatory for me to post or to get ‘X’ number of likes and ‘X’ number of followers. For me, it is fun and a platform to connect with people. I want to share my story and also hear the stories that others have to share. I am very lucky that people relate to me and I have reached 33 million followers. I feel responsible towards them and that is why I don’t want to disappoint them.”

We provide you with the latest breaking news and videos straight from the entertainment industry.
Contact us: i[email protected]