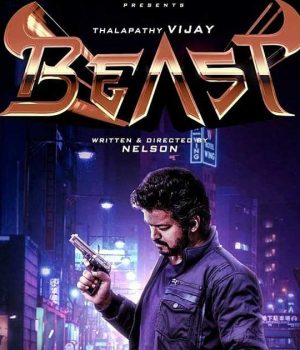 Tamil film of the year ‘Beast’ featuring Vijay is scheduled to release on April 13. The movie is directed by Nelson Dilipkumar and it has Pooja Hegde, Selvaraghavan, and Yogi Babu in its cast. The movie is releasing on the same weekend as the pan Indian Kannada film ‘KGF 2’ and Bollywood film ‘Jersey’ are releasing.

The Hindi dubbed version of ‘Beast’ is reportedly getting released in the theatres and the movie will be screened on more than 600 screens. The Hindi dubbed version of the ‘Beast’ trailer was launched last evening, April 4 at 6 pm by actor Varun Dhawan. It is titled ‘Raw’ in Hindi instead of ‘Beast’. For the ‘Beast’ Hindi version to be screened on over 600 to 700 screens is massive as it is released along with ‘KGF 2’ and ‘Jersey’. It is expected that the ‘Beast’ Hindi version titled ‘Raw’ will either be released on April 13 or April 14. The dates for the Hindi release have not been decided yet.

Vijay was last seen on the big screen in 2021 with his film ‘Master’, so it is expected that fans will celebrate ‘Beast’ as a festival. The trailer of the film was released on April 2 in Tamil and has garnered more than 30 million views.