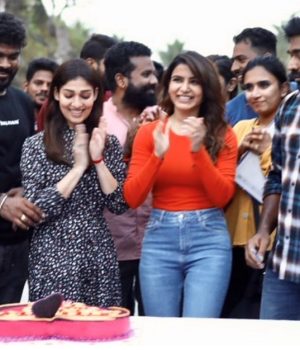 Samantha Ruth Prabhu on Thursday shared an announcement that the shoot of her upcoming Tamil romantic comedy ‘Kaathu Vaakula Rendu Kadhal’ has been wrapped. sharing some from the wrap-up party along with her post. Samantha said she can’t wait for the film to make the audience laugh till their tummies hurt. In an Instagram post, Samantha wrote: “And it’s a wrap. #kaathuvaakularendukaadhal. Can’t wait for you to laugh till your tummies hurt and then just a little bit more.”

In the film, Vijay and Kaathu Vaakula Rendu Kadhal, Samantha plays characters named Rambo and Khatija, respectively. Nayanthara plays a character called Kanmani. The film’s teaser was released on the eve of Valentine’s Day this year. Going by the teaser, it looks like Vijay Sethupathi plays a character that convinces both Nayanthara and Samantha to settle down in a three-way relationship. The teaser confirmed that the film will hit the screens worldwide on April 28.

The project marks the maiden collaboration of Vijay Sethupathi and Samantha as a pair. Even though both of them were part of the critically-acclaimed Tamil film Super Deluxe, they didn’t have scenes together. The film has music by Anirudh Ravichander. The film marks the reunion of Vignesh, Vijay Sethupathi, and Nayanthara after their previous outing Naanum Rowdydhaan.