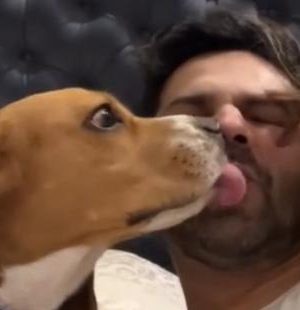 Varun Dhawan often takes to his Instagram handle to share cute pictures of him and his furry friend Joey. It is evident from those pictures that he loves Joey a lot. Well, Varun’s wife Natasha Dalal stays away from the limelight and it is not always that the Kalank actor shares pictures with her. Well, today he shared a cute video wherein we can see him getting smothered with kisses from Nata and Joey and we bet this video is too cute to handle.

The video begins with Varun Dhawan playing with Joey on his bed. Then we can see Varun lying down in between Joey and Natasha Dalal as they both kiss the actor. Indeed, it is adorable. The video proceeds with many video clips of Varun playing with Joey in his house, on the beach and there are certain cute pictures of the two. Sharing this video, Varun wrote, “Tera jaisa yaar kahaan.”

On the work front, Varun Dhawan has a lot of exciting films in his kitty. He will next be seen in Jug Jugg Jeeyo opposite Kiara Advani. This film will also feature Neetu Kapoor and Anil Kapoor in pivotal roles. Then he has Bhediya opposite Kriti Sanon. He will also be seen in Amar Kaushik’s upcoming horror-comedy Bhediya with Kriti Sanon.