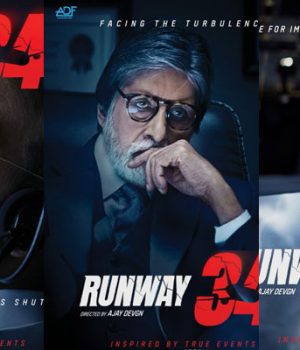 Runway 34 starring Ajay Devgn, Amitabh Bachchan, and Rakul Preet Singh is all set to release on 29th April 2022 (Eid weekend). The makers have already created a good buzz about the movie with posters and a teaser which was released last week. The film is inspired by a true incident, and today, the much-awaited trailer of Runway 34 was released with a lot of fanfare at an event in Mumbai. Fans of Devgn and Big B have been eagerly waiting for the trailer, and their wait has finally come to an end.

Ajay took to Twitter to share the trailer with his fans. He tweeted, “Every second counts. @ADFFilms proudly presents the trailer of Runway 34. We are ready for take-off. https://bit.ly/Runway34Trailer #Runway34Trailer @SrBachchan @Rakulpreet @bomanirani @CarryMinati.”

The trailer of the film is intriguing, and Runway 34 surely looks like a thrilling ride. Big B as usual is fantastic in the trailer, and Devgn is also damn good. Rakul and Angira Dhar also leave a mark with their act. Ajay and Big B have earlier worked together in many movies like Khakee, Hindustan Ki Kasam, Major Saab, and others. Their fans are excited to watch them on the big screen together again. Ajay is not just an actor in Runway 34, but he has also directed the film. Earlier, he has helmed films like U Me Aur Hum and Shivaay.