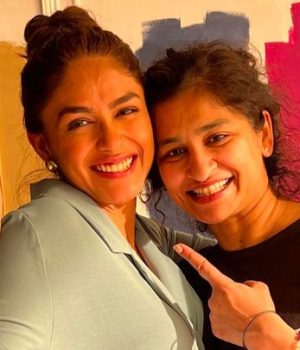 Mrunal Thakur has now sparked collaboration rumors with director Gauri Shinde as the actor recently dropped a trail of pictures with the English Vinglish director via social media. Mrunal, who will soon be seen alongside Shahid Kapoor in the upcoming sports drama Jersey, was seen hugging Shinde as she called the latter her ‘dream director.’

Taking to her Instagram handle recently, Mrunal dropped a series of photos showcasing her shedding smiles with Shinde. The duo could be seen goofily posing for the camera as Mrunal hugged the filmmaker. In the caption, she mentioned, “Oh hello Dream director,” and further added hashtags like ‘Smiling ear to ear’ and ‘blessed’.

Reacting to the post, fans dropped comments like, “hug to you super talented girls”, while one mentioned,” what’s brewing”. actor Amruta Subhash also mentioned, “Ohh hug her on my behalf”. While not much is known, fans are surely excited to see Mrunal and Gauri Shinde come together. Shinde is known for directing films like Dear Zindagi, starring Alia Bhatt in the lead role as well as English Vinglish, which saw the late actor Sridevi essaying the lead.

Meanwhile, Mrunal, who made an extended appearance in Kartik Aaryan’s thriller Dhamaka, is gearing up for the release of Jersey. After facing various postponements owing to the COVID-19 pandemic, in Jersey, the Shahid Kapoor starrer will hit theatres on April 14, 2022. Written and directed by Gowtam Tinnanuri and it’s a remake of the 2013 Telugu film by the same name.