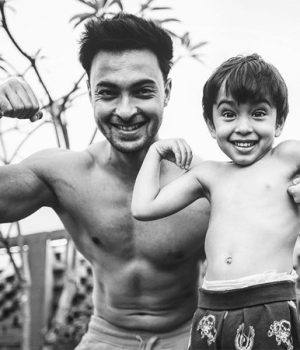 Aayush Sharma never failed to give his fans a treat from his family. Aayush is a doting father to his two children son Ahil and daughter Ayat, he married Salman Khan’s sister Arpita Khan. Recently, Aayush shared a video in which he seems giving Ahil a stylish hairstyle. He shared a video on Instagram and captioned it, “My alternate profession.” His son turned six on Wednesday.

The video opens with Ahil standing in the bathroom in a shirt and shorts and black shoes. When Aayush asks him what he is there for, he replies, “You to make my hair.” As Aayush begins working on his hair by combing it, Ahil says “hi” to him. He replies, “Hi beta.” He also tells him that he wants to be like him, to which Aayush simply laughs.

When Aayush gives him a blow-dry, sprays some hairspray, and combs his hair in a certain way, Ahil looks at himself in the mirror with a big smile on his face. “I am looking cute,” he says. Later, as Aayush gives a better look at his new hairdo, he says, “I am turning six.” When Aayush asks if that’s a hairstyle for a six-year-old, he says, “ya.”

In front of work, Aayush made his Bollywood debut with Loveyatri in 2018. He tasted success with his 2021 film Antim: The Final Truth, which also starred Salman Khan. He will now be seen as an army officer in the film, Kwatha.