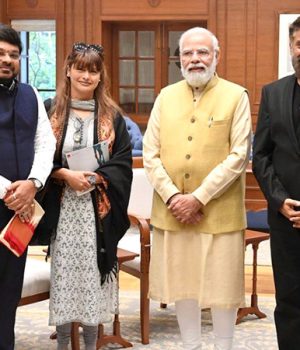 The Kashmir files released in theatres on March 11, 2022 and the movie is already making waves across Bollywood and generating rave reviews.

On the eve of release and positive response, the team of The Kashmir files including Director Vivek Agnihotri and his actor-wife Pallavi Joshi along with Producer Abhishek Agarwal met with Prime Minister Shri Narendra Modi.

Abhishek mentioned that PM Modi had appreciative words for the movie. Abhishek tweeted about this visit on his twitter, which Vivek Agnihotri retweeted with his response.

I am so glad for you @AbhishekOfficl you have shown the courage to produce the most challenging truth of Bharat. #TheKashmirFiles screenings in USA proved the changing mood of the world in the leadership of @narendramodi https://t.co/uraoaYR9L9

The Kashmir Files stars Anupam Kher, Mithun Chakraborty, Darshan Kumar, Pallavi Joshi, among others. Written and directed by Vivek Agnihotri, the film narrates the story of the exodus of the Kashmiri Pandits during the Kashmir Insurgency.