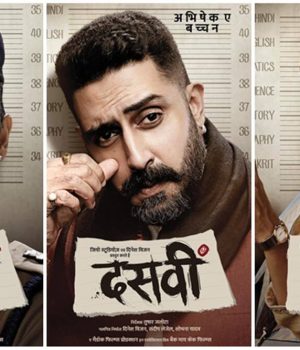 Yami Gautam will next be seen in Dasvi as a police officer, recently Yami and the cast of Dasvi Abhishek Bachchan and Nimrat Kaur visited Agra Central Jail for their film screening for 2000 prisoners. During the filming, prisoners indirectly approached the Team of Dasvi to send their messages or get the star’s autograph. Yami said that while she did not keep these messages as taking any character home can be overwhelming there is the story of a jail inmate that has stayed with her.

Yami told, “There was particularly one inmate, his story kind of stayed with me. I didn’t even meet him. But he sent his register just for an autograph and with a picture of his daughter. And it had written notes which he prepared for his daughter, who is a teenager. And it had different career options – if she wants to become an IAS officer, this is what she needs to score in 12th, and so on and so forth. If she wants to join the army, this is the procedure. And if she wants to become a banker. .. and of course, that has happened at the library. I am sure that’s where he had gathered all the information.”

She continues, “We never know what somebody’s story is and you know what’s happening in someone’s life. Right now, of course, we couldn’t interact with the inmates. But whatever little stories that you get to know as actors, as humans, you don’t even realize there’s so much happening around.” Dasvi will be released on the OTT platform on Netflix and Jio Cinema on April 7.