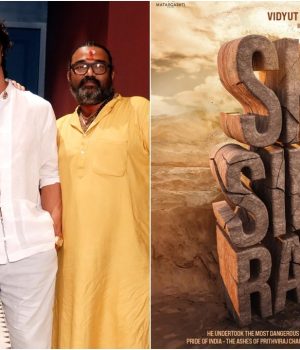 Vidyut Jammwal is now gearing up to essay the role of a fierce Rajput in the upcoming biopic titled, ‘Sher Singh Raana.’ Vidyut made it official via social media by sharing the first poster of the film. The period biography is bankrolled by producer Vinod Bhansali. The film will be directed by Shree Narrayan Singh.

While talking about the film Vidyut told that he is utterly excited about playing a character as it marks his first biopic. Vidyut said, “Sher Singh Raana marks my first biopic. I think destiny connected the dots when the role of the fearless Sher Singh Raana came to me. I look forward to working with Vinod Bhanushali and Shree Narrayan Singh.”

As per reports, Sher Singh Raana was a ferocious Rajput who became known for bringing back the remains of Maharaja Prithviraj Chauhan from Kandahar Afghanistan. The upcoming biopic is touted to be a thriller that will put audiences on the edge of their seats. Further details about the cast and crew of the biopic remain under wraps. However, the director of the film believes that Vidyut Jammwal, who is known for his action-packed movies, is a perfect fit to essay the adventures and exploits of the great personality. On the work front, Vidyut will be seen in Khuda Haafiz Chapter 2 and IB71.