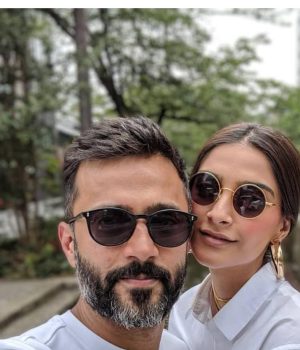 Sonam Kapoor and Anand Ahuja’s house in New Delhi was robbed in February. As per ABP News Marathi, cash and jewellery worth Rs 1.41 crore was stolen. Anand Ahuja’s mother was the first one to rush to the police station to lodge a complaint regarding the same. Given that the matter is serious, the Delhi Police officials immediately started the investigation.

The report further adds that currently Delhi police is questioning Sonam and Anand’s staff members. The report claimed that police officials are questioning over 29 employees besides 9 caretakers, drivers, gardeners and other staffs. Not only this, even the FSL is involved in evidence collection from the crime scene, which is Sonam-Anand’s house.

The robbery took place in February but the case was kept under the wraps as it was high profile. The investigation is ongoing and police officials are reportedly yet to find the people behind it.
According to the report, Sonam’s father-in-law Harish Ahuja and mother-in-law Priya Ahuja live with Anand’s grandmother Sarla Ahuja at the Delhi house on Amrita Shergill Marg. Anand’s grandmother said in her complaint that she found out about the robbery on February 11 when she checked her cupboards for cash and jewellery. And few days later, the complaint was filed. She added that the last time she checked the jewellery was two years ago.
As soon as the case was filed, the police began to investigate. Besides questioning the staff, the police officials are also looking into the CCTV cameras from the previous year.

Sonam-Anand keeps making headlines. Last month, Sonam had announced her pregnancy. The actress had shared a bunch of photos and captioned it as, “Four hands. To raise you the very best we can. Two hearts. That will beat in unison with yours, every step of the way. One family. Who will shower you with love and support. We can’t wait to welcome you. #everydayphenomenal #comingthisfall2022.”