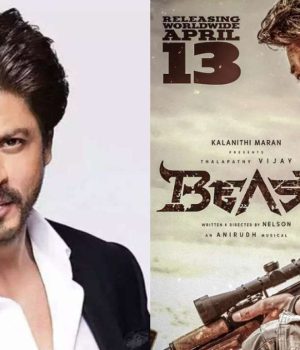 Earlier, Shah Rukh Khan is busy with his upcoming film ‘Pathaan shoot with Deepika Padukone. Now Shah Rukh is back in town after completing his schedule in Spain. Recently King Khan reacted to Thalapathy Vijay’s film Beast and in the Hindi version, its name is ‘Raw. Shah Rukh Khan took to Twitter and shared the trailer, he wrote “Sitting with @Atlee_dir who is as big a fan of @actorvijay as I am. Wishing the best for the beast to the whole team…trailer looks meaner…. Leaner… stronger!!”

Sitting with @Atlee_dir who is as big a fan of @actorvijay as I am. Wishing the best for beast to the whole team…trailer looks meaner…. Leaner… stronger!!https://t.co/dV0LUkh4fI

After SRK twits, Fans are left impressed with him for praising Vijay. One user wrote, “thank you to the Badshah of Bollywood Shah Rukh Khan sir for his tweet on the #Beast trailer. Excellent gesture. He also admits he’s a big fan of #ThalapathyVijay. Genuine appreciation for the brilliant trailer. Expecting #ThalapathyVijay and SRK in a film together.” Another tweet read, “Happiest Moment For All @iamsrk & @actorvijay’s Mutual Fans?? Thank You King Khan❤️ Hoping That We Will Be Able To See Thalapathy & SRK In A Movie Together❤️ @Atlee_dir @Jagadishbliss Make it possible.”

On the work front, Shah rukh has Pathaan which also stars Deepika Padukone and John Abraham in a pivotal roles, other than this he will also be seen in Tiger 3 as a cameo. Shah Rukh also has Atlee’s next untitled project which also has Nayanthara.