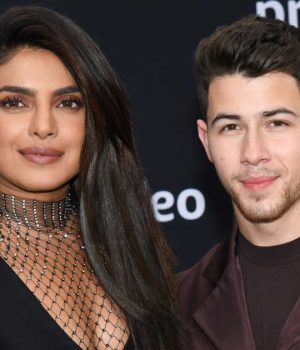 Priyanka Chopra is in a happy space after the birth of her baby. Although she has taken a back seat on social media yet she manages to make sure that she shares glimpses of her day from time to time. A picture of her walking with a little girl has surfaced on the internet as the actress’s heads to enjoy her hubby Nick Jonas’ game. We have to admit that this picture is adorable and PeeCee looks cute in her casual attire as only her back can be seen in the picture.

In the picture, we can see Priyanka Chopra dressed in red-colored ankle-length pants that she paired with a long oversized sky blue jersey. She held a crossbody bag around her and left her hair open. Her jersey had her name written and the number written was 2. She can be seen walking with a little girl who was dressed in an orange jacket over her yellow dress, red cap, and silver boots. Well, on the other hand, Nick Jonas too shared a couple of pictures from his game day. He shared a picture of him in the middle of striking a shot and looking dapper in his all-white attire. The pictures that Priyanka shared on her social media were clicked by Divya Jyoti. 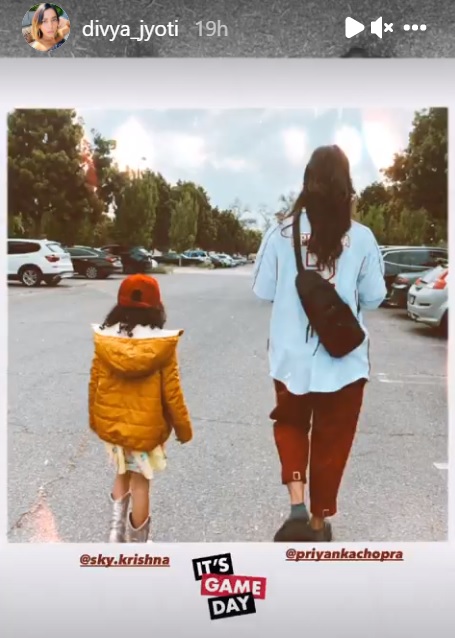 Meanwhile, recently during a live session with ETimes, Priyanka Chopra’s mother Madhu revealed that she hasn’t met her granddaughter yet and further informed that Priyanka is happy with the new addition to the family. She said that she has not seen her as she is in LA however they Facetime each other once in a while. Expressing her excitement about becoming a grandmother, Madhu Chopra said that she had been waiting for something like this to happen for a long time.