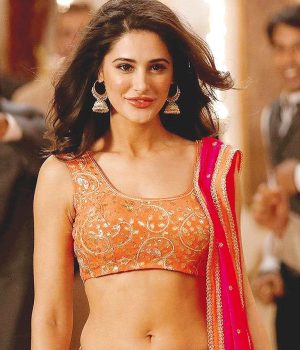 Nargis Fakhri revealed how people misunderstood her for being pregnant when she had gained a few pounds. Body shaming is not new in showbiz and several Bollywood female artists have opened up about being body-shamed at some or other point in their career. The actress who took a break from Bollywood and went to the USA is now back in India.

Nargis recently walked the ramp at FCI Lakme Fashion Week. In an interview with Hindustan Times, Nargis revealed that she was a victim of body shaming. “I definitely faced body shaming for a short time. I do believe there is a certain look or appearance people expect from you. So there is pressure to maintain that. When I first came to India, I was too skinny, so everyone was like ‘you need to put on weight’ I then maintained it, I have a naturally skinny state. Later I gained about 50 pounds, so they posted I was pregnant, which I thought was not funny, but also very funny. I think at first my feelings got hurt, but I realized it’s my job to take care of myself. I lost 40 pounds, worked out, and got that body back.”

On the other hand, Nargis recently made headlines for being in a relationship with US-based Kashmiri businessman, Tony Beig. When she was asked about the dating rumors, she said, “You know, people say so many different things, so I am actually not going to say anything about this, because everyone just writes whatever they want to, so I will just let everyone have fun.” On the work front, she was last seen in Torbaaz. Nargis is currently shooting for her upcoming Telugu film Hari Hara Veera Mallu along with Pawan Kalyan.