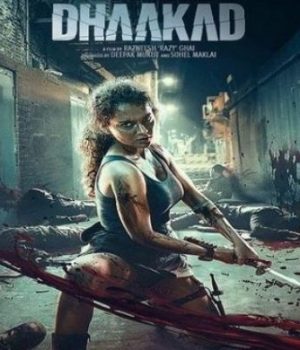 Kangana Ranaut’s next film ‘Dhaakad teaser is released and got a good response from the viewers. The actress has sported 7 strong and intense looks for the film. As Agent Agni, the actress will stun audiences with her seven different looks and multiple combat scenes which have been designed and choreographed by international technicians.

Kangana Ranaut will be seen in unique hairdos and in combat attire showcasing her warrior avatar. Along with the trailer, the actress will surprise the audience with an action-packed first look on the big screen as it will be attached to ‘KGF: Chapter 2’. Director Razneesh Ghai adds, “A new action star is on the rise, with Dhaakad, Kangana truly becomes the master of disguises. Each look is unique and we’ve never seen Kangana do an action like this before”

The film also stars Divya Dutta and Arjun Rampal as the antagonists. ‘Dhaakad’ will see Arjun and Kangana battling each other and their duels are clearly to be relished on the big screen. It is no less than the clash of the titans and the combat sequences have a never seen quality to them.

Dhaakad is designed as an international level spy thriller, directed by Razneesh Razy Ghai and produced by Deepak Mukut and Sohel Maklai. It is presented by Soham Rockstar Entertainment Pvt Ltd in association with Kamal Mukut, Sohel Maklai Productions, and Asylum films.