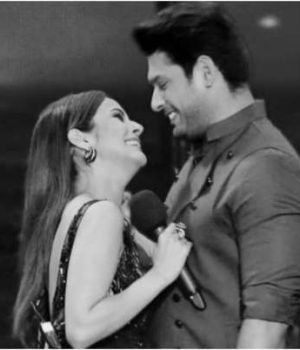 Shehnaaz Gill is one of the most celebrities, she made her first appearance on Bigg Boss 13 where she met the late Sidharth Shukla and they both got bond very well. Recently Shehnaaz was spotted by the media and several pictures and videos of her went viral on social media. Shehnaaz can be seen happily posing for the paps. But some fans notices Shehnaaz’s phone wallpaper and were left emotional.

In a picture shared online by SidNaaz’s fan account, Shehnaaz’s phone wallpaper is visible. Her wallpaper is Sidharth Shukla’s hand holding hers. A fan dropped a comment saying, “Love is beyond everything, even death, and life… SidNaaz.” Another one commented, “Very True #SidNaaz #SidNaazforever.”

Shehnaaz shared a great bond with Sidharth Shukla, who passed away last year. Sidharth’s death left many heartbroken. Time and again, Shehnaaz has called Sidharth a special person. After his death, Shehnaaz went through a difficult time. She has been keeping a low profile. Shehnaaz recently appeared on Shilpa Shetty’s show ‘Shape of You’. She opened up about her bond with Sidharth and said that he always wanted to see her laugh.

In an interview with Face Magazine, Shehnaaz opened up about the term SidNaaz given by fans to her and Sidharth. She told them, “For people, SidNaaz was just a hashtag, their favorite Jodi, but for me, it was a life that I lived and experienced and it will stay with me forever. A big thank you to the audience who loved our pairing together and the hashtag as well. But for me it was not just a hashtag, it was my everything.”