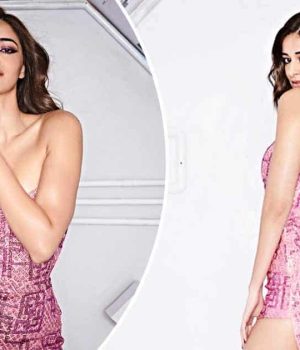 Ananya Panday was subjected to trolls when she walked the ramp for ace designers Falguni & Shane Peacock. To set the runaway on fire, the Gehraiyaan star picked a pink tube dress which a long trail behind. Pairing it with pink strappy heels, Ananya rocked the looks with her wavy hair, minimal make-up, and no accessory.

Soon after her photos surfaced on the web, Ananya Panday was trolled for being a nepotism kid. Fans revived the nepotism debate and said outsiders are never given a chance. A user wrote, “Nepotism rocks,” while another said, “Nepotism rocks, real hard workers do not get the opportunities”

On the work front, Ananya Panday will next be seen in Karan Johar’s production Liger opposite Vijay Devrakonda and it will also feature boxing champion, Mike Tyson. That apart, she also has Kho Gaye Hum Kahan with Siddhant Chaturvedi and The White Tiger Fame Adarsh Gourav in the lead roles.