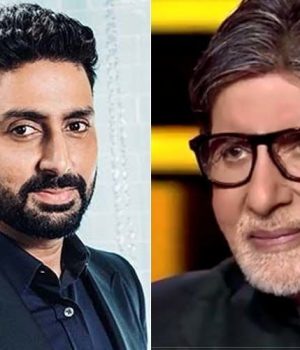 Abhishek Bachchan’s latest release ‘Dasvi’ is garnering immense love and appreciation from the audience. Apart from fans, Abhi’s father and megastar Amitabh Bachchan is also brimming with joy while promoting his son’s film. However, Big B was trolled for promoting Abhishek’s film on Twitter. While singing praises for his son, Megastar Big B took to his Twitter and wrote, “मेरे बेटे, बेटे होने से मेरे उत्तराधिकारी नहीं होंगे; जो मेरे उत्तराधिकारी होंगे वो मेरे बेटे होंगे !’ ~ हरिवंश राय बच्चन”, As soon as he showered praises on Abhishek, many users started trolling him for supporting his son.

Now, that Big B has hit back at trolls, Amitabh said that he will keep promoting projects on social media platforms. In his latest tweet, Amitabh wrote, “Ji Haan Huzur, Main Karta Hoon: Badhayi, Prachaar, Mangalachar. Kya Kar loge ?” Wow, that’s what we call pushing the negativity in a classy way.

Coming back to film, Dasvi also stars Nimrat Kaur and Yami Gautam in key roles and it is released on Netflix and JioCinema today. The story traces the life of an ‘Anpadh’, a corrupt Jatt politician who landed himself in jail after his name surfaced in a scam. The story revolves around the importance of education and how Ganga Ram Chaudhary played by Abhishek fulfills his only dream of clearing ‘Dasvi’ in jail. ‘Dasvi’ is directed by Tushar Jalota and produced by Dinesh Vijan