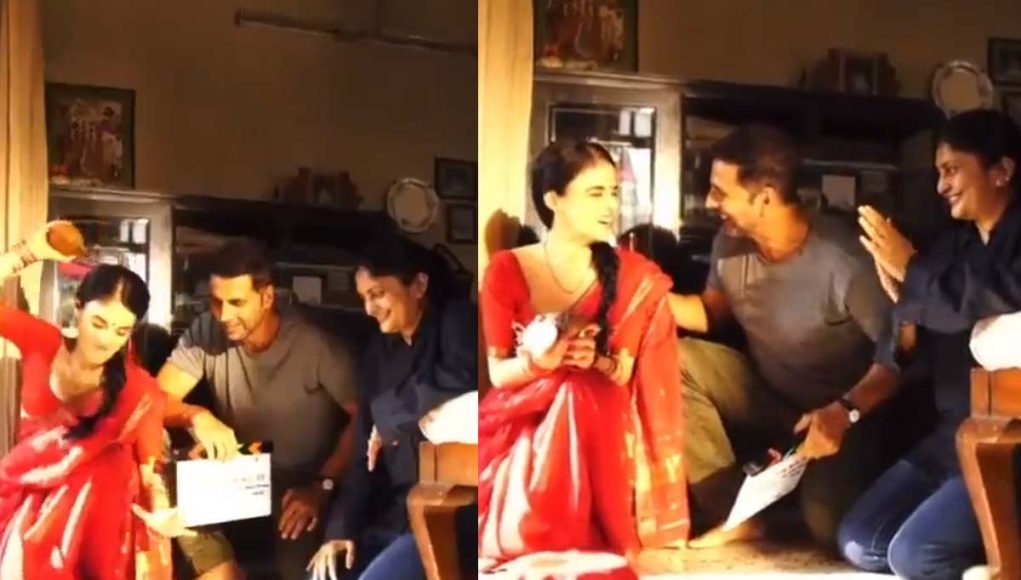 Akshay Kumar is surely a busy actor with a long list of upcoming films in his kitty. The actor, who was last seen in Bachchhan Paanday and was also shooting for Selfie, has now kickstarted a new untitled film with Radhika Madan. The actor recently confirmed the news with a video of him and Madan performing the coconut-breaking ritual and signing a prayer in a new video.

Taking to his Instagram handle, Akshay Kumar recently announced that he has begun shooting for an untitled film co-starring Radhika Madan. The actor shared a video of the auspicious coconut-breaking ritual from the film’s sets. In the video, the actor was seen dressed in a grey colored t-shirt and brown pants, while Radhika Madan donned a red saree.

In the caption, the actor wrote, “With the auspicious coconut-breaking and a small prayer in our heart, we begin the filming of our yet untitled film which is about dreams and the power of it.” The actor further asked fans to suggest a title for the film and wrote, “In case you’ll have any title suggestions, do share and of course your best wishes.” The actor also tagged Captain GR Gopinath, the founder of Air Deccan, confirming that the upcoming film is the official Hindi remake of Suriya star 2020 Tamil film Soorarai Pottru.

Soorarai Pottru was based on the life of Air Deccan founder Captain GR Gopinath, who made air travel affordable for the common man of the country. Suriya played the lead role in the film, while Aparna Balamurali portrayed his wife. The film was well-received by the audience who made it a box office hit.